San Francisco’s Asian Art Museum is hosting a Yoga exhibit which spans the turn of the Common Era to the early 20th Century. 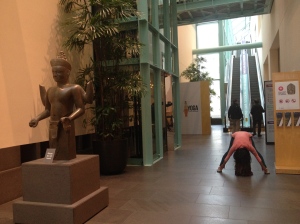 Megha and I made a pass through.

Each of the three rooms compartmentalizes Yoga’s own transition across the globe. It begins with an array of carefully detailed paintings, statues, and bronze cast figures. You’ll see representations expressing the evolution of human understanding of existence and progressive community growth emerging through oral transfer of knowledge. Texts with recordings of sagely wisdom enrobed with intricate borders and complimentary graphics. It’s an entrancing room which tantalizes one’s curiosity as Hindi characters, feminine Yoginis, and ornate wallscapes gracefully tug at your attention.

Brief relief guides your stride from one room to the next. Here you are confronted with an energized leap into a new era of discovery. Namely, Western Civilization’s draw to Yoga: power, savagery, skill, raw beauty, and the extraordinary. Paintings of war, sages holding challenging poses on journal leaves, a yogini offering wise counsel to a young girl, carnavalesque depictions of Indian culture, and glamorizing barbaric beauty litter the jutting walls of this room. It’s a sensational rush of hyperbolic awe. Yoga has captured the attention of the West.

Passing on & in to the final room, you’re greeted by a six-screen projection of famed yogis; Iyengar and Krishnamacharya visually immortalized performing incredible feats of human movement and breathing techniques. Once you’re able to break away from their mesmerizing videos, a brief tour around the room will present you with anatomical diagrams pairing both energetic and physiological aspects associating excellent health with the practice of yoga. Titles and pages reiterating the benefits and fluidity of yoga integrated with meditation, good diet, and massage on transparent stalagmites. All bearing the message: “You can have a Yoga body”.

The exhibit embraces the Art of Yoga. It inspires an appreciating of detail, knowledge, strength, wisdom, dedication, and good health. To this yogi, it is an expression of how the practice of Yoga brings out the best in humanity.

Be sure to see it for yourself.

Body Awakening proudly partners with organizations dedicated to San Franciscans’ health and well-being. We currently partner with the following organizations: